skip to main | skip to sidebar

WASHINGTON, D.C. -- I suppose Knox said it best: "You're not gonna get this part of D.C. from the tour guides."

When we finished our extended stay at The Dubliner, we headed to the Channel Inn (on the water). Knox's father was attending a retirement party there and he said we could help celebrate. I don't know if it's just a common theme in road trips--the "black" bar scene in Animal House and the all-black fraternity in Road Trip--but this retirement party was 90 percent black people. I was the worst dressed person there by a long shot. Still, probably the best party I've been to in years. 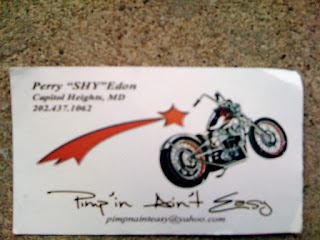 Everyone I met welcomed me with open arms. I met one guy who handed me his business card (left). I don't know if he made motorcycles, sold motorcycles, repaired motorcycles or just loved them. But the old adage holds true: "Pimpin' ain't easy."

The dance floor was a bad idea. In my defense, I got dragged onto that fated parquet. All the women on the floor were performing some kind of coordinated group dance in perfect unison. Needless to say, I was the goofy white guy f'n the whole thing up. After the third hip-bounce, I decided to get off (the best move I made on the dance floor).

As I had said in yesterday's post, this week is Cop Week. After leaving the Channel Inn, we headed to a large outside tent, where thousands of cops from all over the country had flocked. D.C.: their Mecca, if for only this week. I'd say every third woman or man I passed had a badge around their neck. And around the tent perimeter stood kiosks of cop paraphernalia (cop art, handcuffs...you know, the usual stuff). 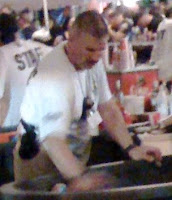 The bar was pretty interesting. Apparently cops serve and protect beer too (note the guy packing heat as he digs into a cooler).

But, jokes aside, this national get-together of law enforcement had its merit. Knox's friend Richie, a D.C. weapons cop, told me this was the time when cops come together to remember policemen who had died. The other two thirds of people I saw under that tent--the ones without the badges, he said--had probably lost a friend or family member in the line of duty. It's a dangerous job, but someone's gotta do it.

From there we headed to another Irish bar, The Irish Channel on H Street (our goal: to go to at least one in every city we stop). I had just ordered a Magner's on draught and a Miller Lite, when three bagpipers walked in to serenade the crowd. 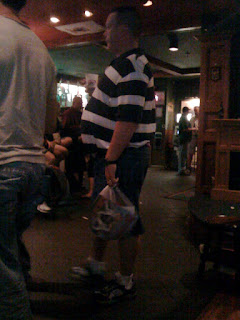 This guy (left) liked it.

The soothing sounds of bagpipes eventually lulled me and we decided to turn in.

We'll be in D.C. for one more night and then it's on to Tennessee. I think we're stopping in Knoxville before we continue on to Sheridan, Ark. to visit Katie's family. Until next time...
share on: facebook
Posted by Mike Del Rosso at 12:43 PM